So I have this group of friends/family. They make up a significant portion of my “net.”

We don’t have a name, really, like CKR, but we do refer to the group, usually, by referencing our hashtag we use to hype ourselves up for events where we’ll all be together. It’s #gamenightbitchezzz (With three Zs. Don’t forget), though it has been changed once to #weddingbitchezzz and another time to #bachelorettepartybitchezzz.

Anyways. We get together somewhat regularly to play games, which almost never seems to happen anymore, though we did have our very own Field Day event this summer.

We have our usual games – some of which involve drinking – and then we often play one of our old standbys, like Charades.

We have made games that don’t require drinking into drinking games and I’m going to explain one of them to you now. Maybe you can share with your group of friends and play it sometime. And if you play it as a drinking game, everyone wins.

OK. It doesn’t have a name yet, so I’ll welcome possible names in the comments.

Rules of That One Game You Play With Your Phone (And Alcohol):

Yep. We made a game out of that shit.

It started one night while some of us were waiting to go see a movie. The Avengers, I think. We’d had a group text going before we got there and I guess that’s how it started? We wanted to see who had the best phone, so we started sending a group text and holding our phones together in the middle of a circle to see whose lit up first.

And we all had the same phone (except Liz, who voiced her concerns when it was her turn to be Texter). 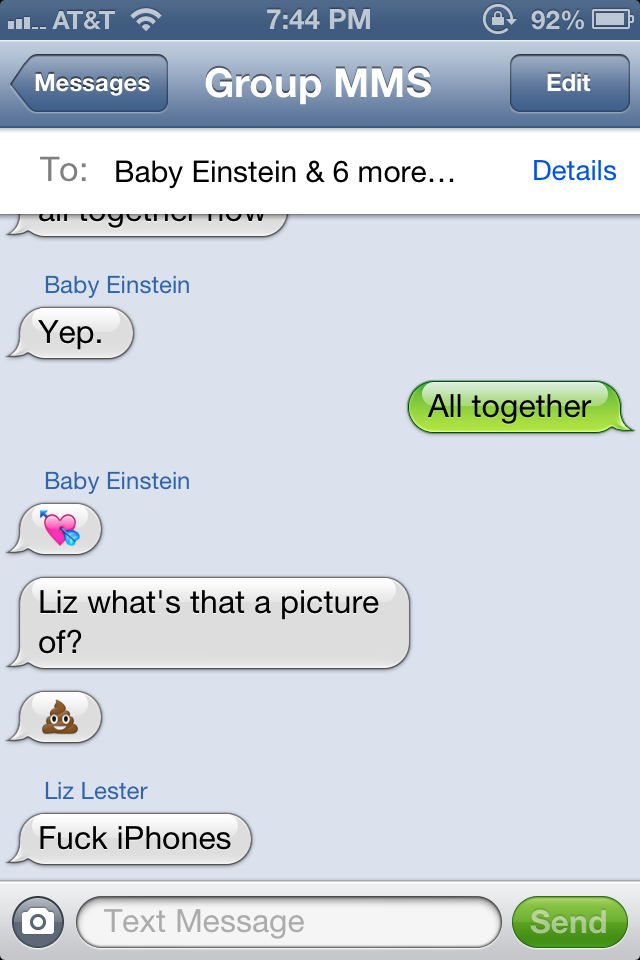 And it was different EVERY TIME! So naturally, when we were all together at Derby, we saw an opportunity. Plus, that time we had alcohol.

And the drinking game was born.

It doesn’t have to involve drinking – you could just play to see who has the better phone.

It really is fun either way. And soooo much easier than acting out the word “marsupial” for Charades which I did once, successfully, LIKE A BOSS.