I had this metaphor in mind for how online dating was like Pokemon Go, but not in a good way, because you catch all of the crazies and you don’t want to and then I realized I may not understand Pokemon Go and it all fell apart. But I also don’t really understand dating these days either, so maybe it does work? #fullcircle #inception

I know what you’re thinking – L, you are SUCH a catch. How on EARTH are you not spoken for yet? And to that I say – I guess this screen on my Bumble account speaks to that. 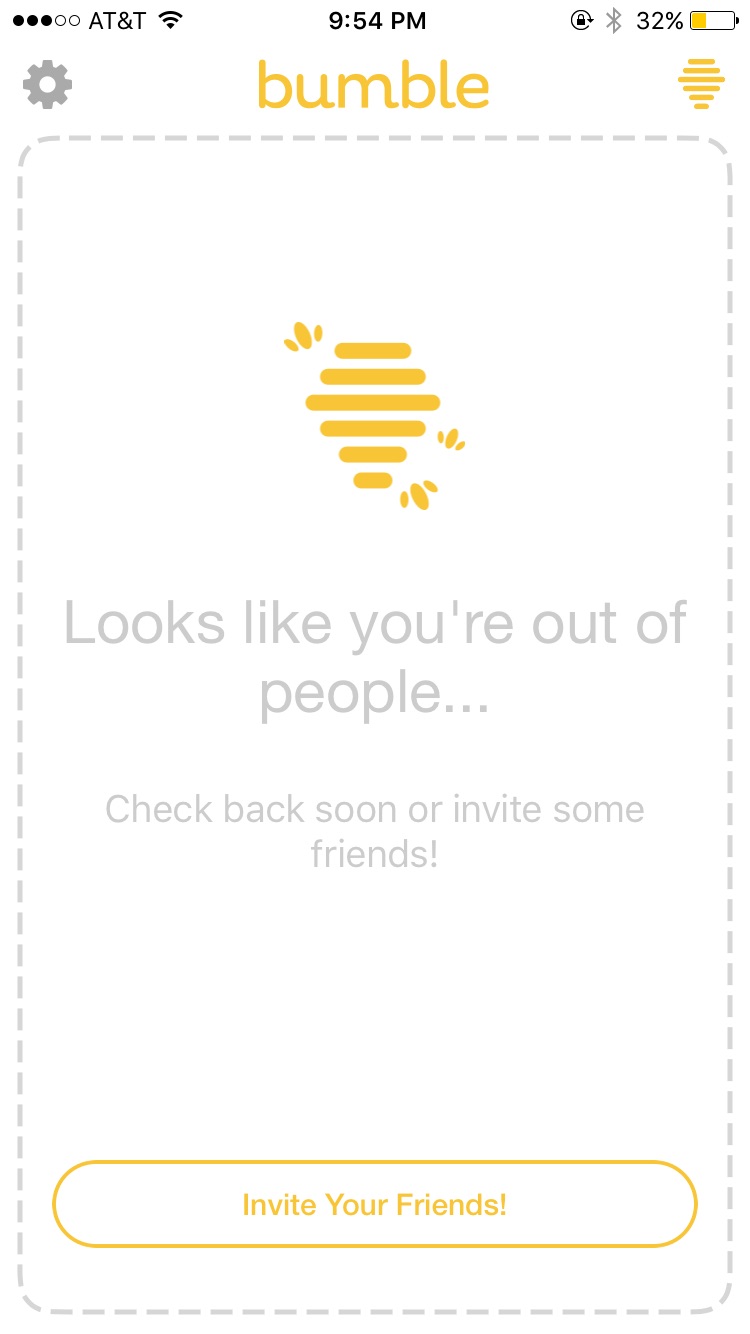 Dating is exhausting. Or at least, thinking about dating is. Movies and TV shows where you just run into each other at the grocery or something are bullshit. I go to the grocery on the reg and have yet to be hit on. Even on days I don’t wear my yoga pants.

I just looked and it’s been over a year since I’ve updated you on my dating life. I’ve been on a good amount (in my mind anyway) of dates in that time. So I haven’t given up ALL hope. But you guys.

I made the mistake of staying on Tinder until earlier this summer. Because I guess I needed attention.

About this time last year, I met a guy, Jared, through there who was in town for the week from work from Pennsylvania and I figured we’d get a drink, why not.

A drink turned into much more – including him continuing to text me once he went back to Pennsylvania and making plans to meet up when I went up to see my cousins because he was only a couple hours away. OH. And he managed to finagle his way onto another work trip down here a couple months after we originally met. He picked me up from the airport when I got back to Louisville, yes there was distance but we were seeing what happened because we’d had such good chemistry and conversation and stuff.

Example text, and in case you want to know my flirting style:

Until he went back to Pennsylvania after that second visit and CEASED EXISTING BASICALLY.

Aside – Will we ever be past ghosting? I hate it. So much. It’s a common theme these days. Because why actually tell someone how you feel when you can just disappear? HA. Feelings.

If only that was the end, y’all. But it wasn’t.

Earlier this summer, he apparently needed to feel better about himself and his shittiness so he messaged me on Facebook and acknowledged that he was an asshole and what he did was wrong. And that he regretted it because he liked me and he fucked up.

To all of that I said… Yup. You’re right. He asked if he could text me again and I allowed it because I wanted to see how far he would take the apology and try and figure out why he even bothered. We talked for about a week before, to nobody’s surprise, he disappeared again. I wrote a strongly worded message in response to that one and then sent three middle finger emojis the next time I got drunk. Because I am a classy lady that way.

Then I had this exchange and was done. 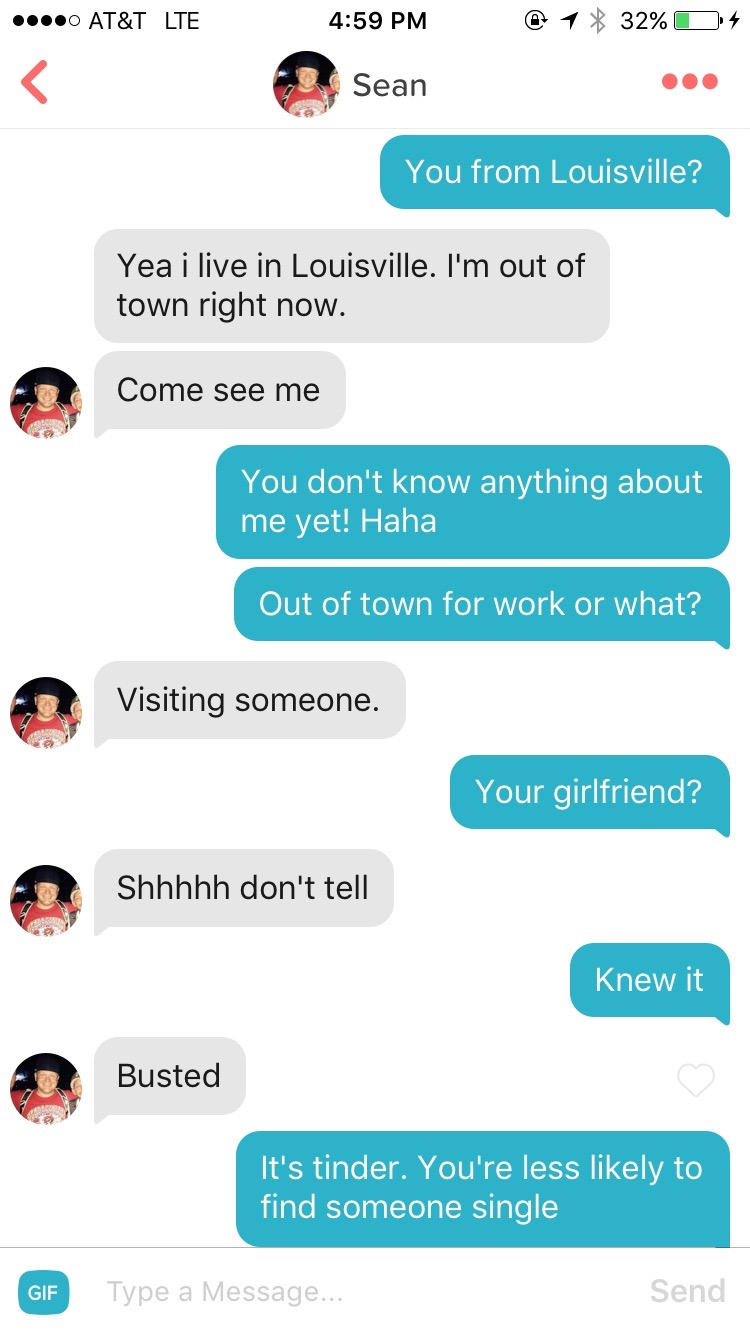 In the winter, I changed it up and tried Bumble – a novel concept in that it’s basically Tinder but the girl has to initiate the conversation. No problem. I’m a feminist. Within a few weeks, I’d re-met someone from my high school who I kind of knew back in the day and he asked me out after a few days of talking.

We had an awesome first date – one of the best I’ve had in a while. Great conversation, a lot in common, he was really smart and I liked making out with him. Here’s the catch – he was unemployed. And living at home. I get extenuating circumstances and stuff, but the way he made it sound, he’d gotten fired. And he had no idea what he wanted out of a new job, his future, anything really.

I’m not nitpicky, but you gotta have some direction.

We went out a couple more times – had a conversation about how he was a horrible texter/communicator which should have tipped me off – and then he decided he didn’t want anything more serious than a hookup. Which I had to get him tell me after much prodding because he again, didn’t have his shit together in any way, really.

I deleted the app. Then re-added it.

I’m all about flirting but I’m not gonna play a game with you. Especially when I’m not entirely sure that it’s not gonna end in an unwelcome and unrequested dick pic.

A couple months ago I went on a couple dates and was talking fairly seriously – and fairly long, actually – with a guy from Indiana. That right there goes against everything in me, because Indiana.

Long story short since hopefully you’re seeing the theme here… all was good until it wasn’t. Meaning three dates in he suddenly “didn’t have time to date right now.” Which is funny cause he was on an alleged dating site trying to meet people. To date. Allegedly.

So. In conclusion. I have trust issues. And need a break. And am taking one. I’m not going looking. A relationship can come find me. Maybe in the grocery.