In a few weeks, my sisters and Chuckie and I will reunite in Boston for the first time since this time, but for a different reason entirely.

You see, once upon a time, when Rachel and I were young and thinking our jobs would pay us well enough to do such things – we told Sami, “Yeah! When you turn 21, we’ll celebrate by taking you to New York City!”

And all these years later, she remembered, although I’ve heard it was with a little help from one of my roommates. Whoops.

Don’t get me wrong, we always wanted to take her. But there was that whole paying to get up there and having a place to stay.

Well fate intervened in like 12 different ways – including the fact that one of the three of us would be a short drive away from NYC by Sami’s 21st birthday. That meant we could split our time in Boston – where we could stay for free – and NYC.

Add in the most amazing, awesome, wonderful parents and Santa Claus, who gifted us for Christmas and birthdays the plane tickets to get up there, and well, we’re making it happen.

Over Rachel’s actual birthday and St. Patrick’s Day, the four of us (and hopefully a couple cousins that live close by) will be celebrating in New York! Sami turned 21 a little over a week ago, Rachel will turn 27 while we’re there, and a few weeks after we get back I’ll – gulp – turn 30. ACK.

So anyways. As part of this trip, the great Itinerist (is that a thing? or is it just itinerary maker? or tour guide) – Rachel – is making a list of stuff for us to do while we’re in town. We had to send her some ideas and mine ended up pretty doable, I think – an NBC tour and a visit to the World Trade Center Memorial, and as is always on my wish list for a Boston trip – going to see the Sox play.

(I’m one for three. They aren’t doing NBC tours while we’re there. And there aren’t any Red Sox games. I DON’T ASK FOR MUCH, PEOPLE.)

Well, actually I do. Here’s my ENTIRE list of stuff I actually want to do in New York and in Boston during our five day trip.

• Be the one to say “LIVE FROM NEW YORK, IT’S SATURDAY NIIIIIIIIIGHT!” during SNL’s cold open.
• Ice skate at Rockefeller Center (because, let’s be real, it’ll still be winter when we are there because winter will never end)
• Have this happen to me: 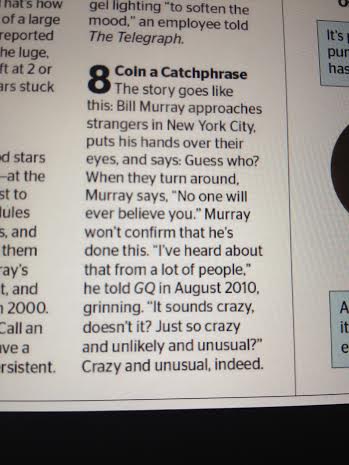 • Hop in a cab and tell them to “FOLLOW THAT CAR!” just to see what they’d do.
• Speaking of cabs – find the Cash Cab and be on and win that show.
• Convince somebody random to fake propose to me at the top of the Empire State Building and cause a ruckus on FB when I post the picture after we get home.
• “Good game” a famous person.
• Be an extra in whatever show is filming there at the time.
• Find out where the Central Park Rangers are and see if they’re as mean as they’re portrayed in Elf.
• Instagram the shit out of everything.
• Buy fake sunglasses out of a suitcase in the park like I did when I was in seventh grade (the only other time I’ve been to New York. Also, moments after it happened we saw the people we bought them from get arrested.)
• Go to Times Square and ask someone where Times Square is.
• Visit FAO Schwarz and play something on the floor piano like in Big. It’s still there, right?
• In Boston: go to Wahlburgers and meet Alma Wahlberg and become best friends with her.
• Also in Boston: find Big Papi (David Ortiz for those not in the know) and become best friends with him.
• Have an awesome five days with my sisters and brother-in-law.

I think I’ll be able to check all those off, no problem.

Follow @LoBoogie
In Jesus’ name amen. #pirate
Our boys are headed to State! Silver medalists in today’s regionals. So stinkin’ proud of them! #goroyals #soky
❤️ Happy Valentine’s Day, my loves! ❤️
Current mood.
When you get “World’s Best Coach” socks you of course put them on immediately. Thanks, @macdefense!!
Got to meet my girl Isla tonight and she’s as perfect as I knew she’d be. I told her how I was her fairy godmother since I introduced her parents and that I love her a lot and can’t wait to watch her grow. Oh and her parents were there too. 💖💖💖#auntlaura #matchmaker #godmother @meetthegoobers @jacquiweishaar