Once upon a time, I got an email from Groupon (as I do every day, sometimes annoyingly) with their daily deals. Leading the email? A $30 deal for a Murder Mystery package. Half the price it usually sells for, to get a 150+ page PDF of just about everything you’d need to host your own event.

You guys, I’ve wanted to host or attend a Murder Mystery party for a long time. Like, ever since the Clue-ish episode of Saved By The Bell. And then again when Hef and the girls did one at the Playboy Mansion on an episode of Girls Next Door (I miss that show…the original one, not the second group).

So naturally, I bought the deal. And I knew just who would go for participating and helping make my dream come true. (I aim high, y’all.) I pitched it to the Game Night Bitchezzz and they were sold immediately.

We held a sort of vote, narrowing it down from the 40 or so possible scenarios to three. The one we ultimately went with was a High School Reunion. As we enjoy having themed events (see: a future Field Day post since I forgot to post about it after it happened last summer and the summer before, whoops)

The story and craziness from that night are too much for one post, so for now I’ll give you the Reader’s Digest version as well as your cast of characters and a few other tidbits about them.

The Scene: Murder High (like, really? Couldn’t come up with a better name for it for $30?) Class of 1983 30-Year Reunion
Fun Fact: Only one person in attendance had been born in 1983. The rest of us were after.
Other fun fact: None of us could do the math right and swore this reunion was happening in 2003, therefore looked up fashion and music styles from both 1983 and 2003. #geniuses
The crime: AV Geek Steve Spielson (or Spielman, I don’t remember) who ended up a big Hollywood producer/hotshot or something gets killed at the reunion. But who did it? ‘Cause we all had motives.
THE CAST:

Terry “T.J.” Johnson – Former hall monitor, current crossing guard and host of this reunion
Played by: Jennifer
Snazzy accessories: Homemade hall monitor belt and police hat
Characteristics added by the actress portraying her: Butch lesbian with a girlfriend named DJ, deep voice, carries around handcuffs though she has no reason to use them. Or does she?
Quote of the night: “DJ and I lumberjack on the weekends.”

Randy Reporter – Former newspaper editor, now works at the Wall Street Journal
Played by: Brendan
Snazzy accessories: Fedora and reporters’ notebook and pen
Fun facts: Fearless in accusing anyone and everyone, only one who had any idea who the actual murderer ended up being (wasn’t him).
Quote of the night: After he saw in his bio where he had supposedly worked previous to the WSJ, “What’s Playboy?” 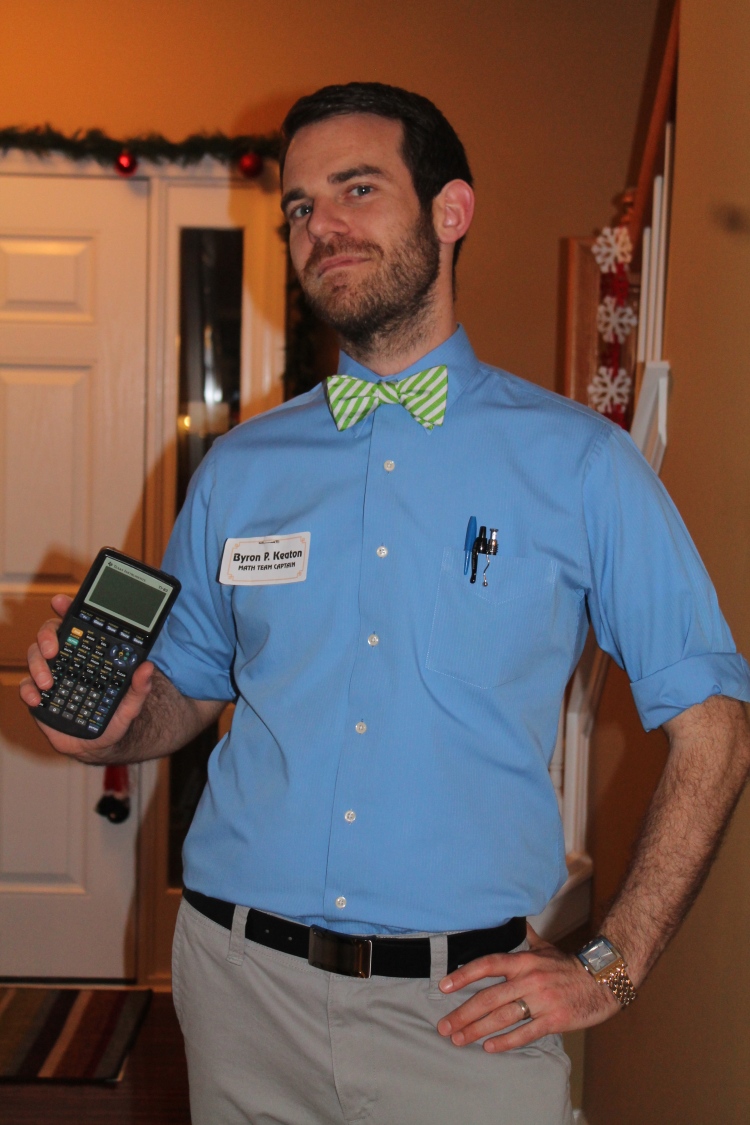 Byron P. Keaton – Math team captain turned accountant
Played by: Matt
Snazzy accessories: Pens in his pocket, TI-83 calculator, bowtie
Fun facts: May have turned T.J. straight at the reunion, at least for a minute.
Quote of the night: We are still not sure because nobody recalls hearing him talk. Thus, the suspicion.
Side story: Byron had evidence in his possession, despite the fact that T.J. asked him several times if he had any and he didn’t know/didn’t turn it over. Again, thus, suspicion.

Molly Ringworm – High school drama queen turned famous actress
Played by: Caitlin
Snazzy accessories: “Emmy” and “People’s Choice Award” which may or may not have actually been from elementary school sporting events, sunglasses, pearls and leather jacket (two of which were left at the party)
Fun facts: Caitlin was appreciative of this character because she said since she has had ringworm it only made sense that was her last name.
Quote(s) of the night: “I’VE MISPLACED MY ENVELOPE!” “Where is my envelope???”

Cindy Crawfish – class flirt who now runs an online dating website
Played by: Anna
Snazzy accessories: Hotness.
Fun facts: Kept going into the other room talking to Chuckie (Class President) with whom she SOOOOOOO was having an affair! Also, at least two of us offered to keep her secrets if she gave us a free account on her dating website.
Quote of the night: “YOU SLEPT WITH STEVE????” (to Sami) 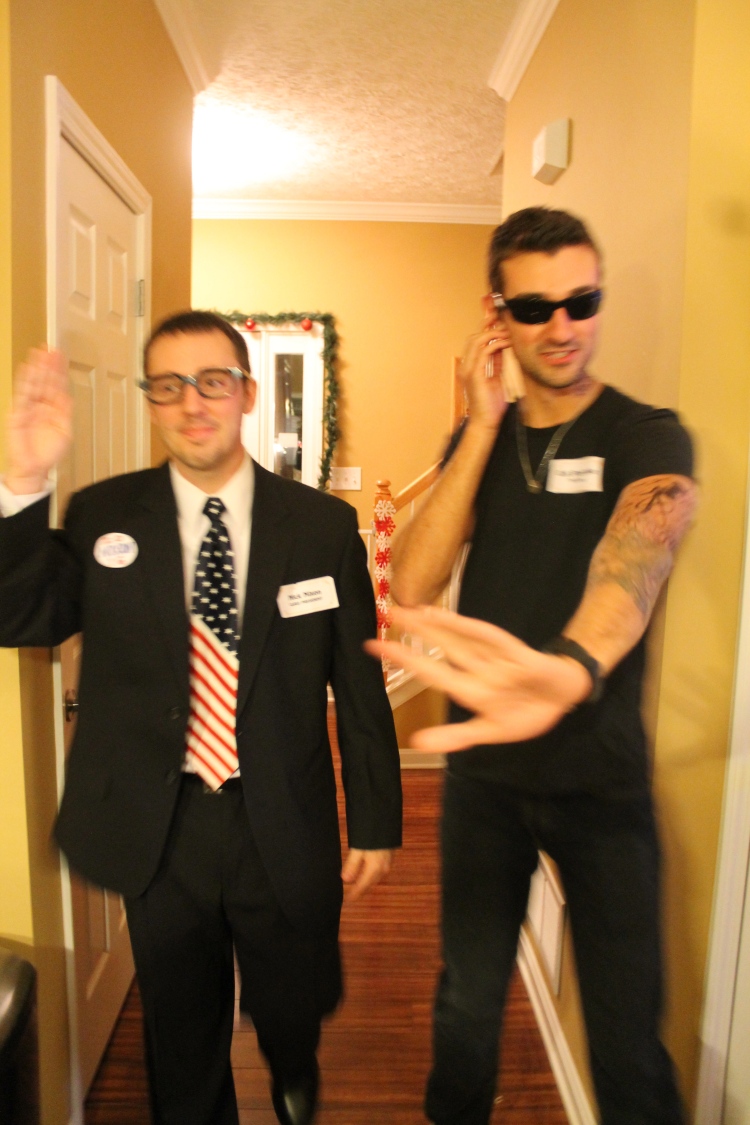 Nick Nixon – class president who is now running for POTUS
Played by: Chuckie
Snazzy accessories: A full suit, brought home from Boston for the sole purpose of this party, and buttons that said things like, “Vote Nick.”
Fun facts: Chuckie was class president for almost all of high school so it was only right that he played this part.
Quote(s) of the night: To Anna, “It’s not you, it’s me.”

B.A. Barricade – BA, of course, stands for Badass, which he was in high school. Now he does security for Nick.
Played by: Shane
Snazzy accessories: Earpiece like a Secret Service guy, sunglasses, neck tattoo that says “Make Good Decisions.”
Characteristics added by the actor portraying him: Ability to change accent at the drop of a hat. May or may not be related to Fonzie.
Fun facts: Ended the night with pretty much everyone’s money.
Quote of the night: “Does anybody else have more than $2,000?”
Side story Liz told me about: “Shane asked Brendan to look out for suspicious people. Later, almost at the end of the night, he approached B and asked ‘So you see any suspicious people around here?’ Brendan looked around the room, looked back at Shane and said ‘Nope.'” 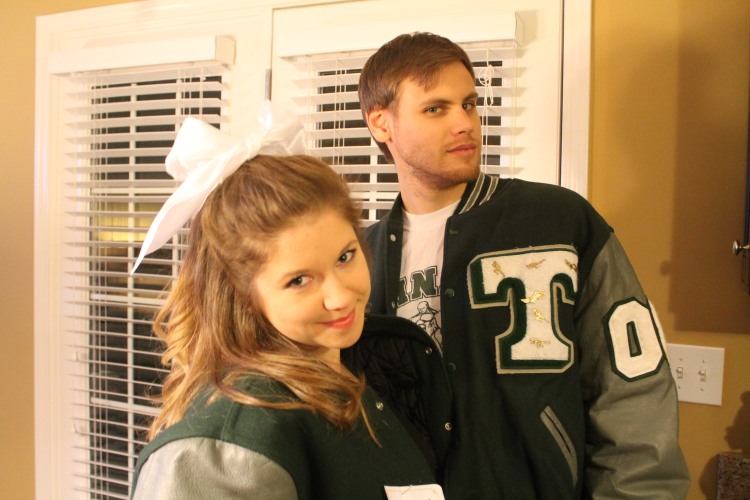 Joe Nebraska – The most popular guy at our high school and now, a high school gym teacher.
Played by: Austin
Snazzy accessories: Letterman’s jacket, swag.
Characteristics added by the actor portraying him: Animal magnetism. Two ladies had a dance-off over him.
Fun facts: This was Austin’s third-ever event as one of the Game Night Bitchezzz and you’d have thought the man had been there from the beginning.
Quote of the night: “Have fun on Christian Mingle!”

Natalie Nebraska – Head cheerleader who now works as a manager at a discount store, Joe’s wifey.
Played by: Sami
Snazzy accessories: Super-high ponytail, matching letterman jackets with Joe.
Characteristics added by the actress portraying her: Hair-twirling, cheerleader-ish moves in every day life, sassy attitude.
Fun facts: Participated in a dance-off against Pamela for Joe’s affections to the classic love song, “Bootylicious.”
Quote of the night: To Anna, “It was just once! In community college!!”

Pamela Abdul – Head of the dance team, now a choreographer, in a feud with Natalie.
Played by: Rachel
Snazzy accessories: Legwarmers, obviously.
Characteristics added by the actress portraying her: General peppiness, sassy attitude, killer dance moves, choreographed for Janet (Jackson, duh).
Fun facts: Participated in a dance-off against Natalie for Joe’s affections to the classic love song, “Bootylicious.” Janet Jackson dance on New Year’s Eve choreographed by her, as evidenced by her doing the dance moves right along with Janet…with a 2 second delay.
Quote of the night: After every time she took a bite of food, “My trainer’s gonna kill me.”

Dani Drums – Band nerd, still a musician but now more on the professional side
Played by: Liz
Snazzy accessories: Marching band wind suit and band clinic T-shirt, clarinet on which she kept only playing Hot Cross Buns.
Characteristics added by the actress portraying her: General nerdiness, super-pissed off at Steve, ability to make everyone at the reunion leave a conversation immediately.
Fun facts: At least two conversations with Dani started with the person saying “Oh hey, how are you?” and turning around and leaving as soon as she started to talk.
Quote of the night: “I’m gr…”

Bobbie Bright – Valedictorian, Most Likely To Succeed and now, obviously, a lawyer with her own practice
Played by: Me
Why there’s no photo of me right here: Because photographer.
Snazzy accessories: Graduation gown and a button that says “The Greatest.” Also, business cards and Harvard T-shirt.
Characteristics I added: Just kept telling everyone how I went to Harvard Law and was valedictorian. And how I do all kinds of law, so if anyone needed legal representation.
Fun fact: Totally didn’t go to Harvard. Also laughed most of the night so I didn’t really have any good lines.

Steve Spielson – AV geek turned Hollywood producer or whatever he was.
Supposed to be played by: Cory
Was actually played by: Oreo