For a long time, the closest I had ever been to a “real celebrity” (you’ll understand the quotes in a second) was that one time at Freedom Hall before the Backstreet Boys concert in my early teens when their opener, THE Aaron Carter, ran along the barricades of fans outside before the show giving high fives. Oh, and when BSB’s drummer came out and everyone screamed for 10 minutes straight ’cause they thought it was AJ. It was my first concert, I was over-excited, OK?

Then, this year, I went to THE celebrity hangout in Louisville, meaning that place where those who have not much better to do, and/or a gambling problem or have finally realized that this place is THE SHIT come visit Derby Week. I’m talking about the Barnstable Brown party. Where I couldn’t believe my life was my life.

But let’s rewind. How did we get there?

I met Ty Pennington when Trading Spaces was a thing – on a break from work at Victoria’s Secret and he had his shirt off and was young and hot, literally and physically and I have that picture somewhere in a photo album and will treasure it forever. My arm smelled like him for my entire shift.

Then I had another quiet period until college – with the exception of a band event in high school where George W. Bush waved at me.

My friend Erin and I met Carlos Mencia and Josh Blue (comedians for anyone who doesn’t know and they’ve basically fallen off the face of the earth now..) after their show at Western. 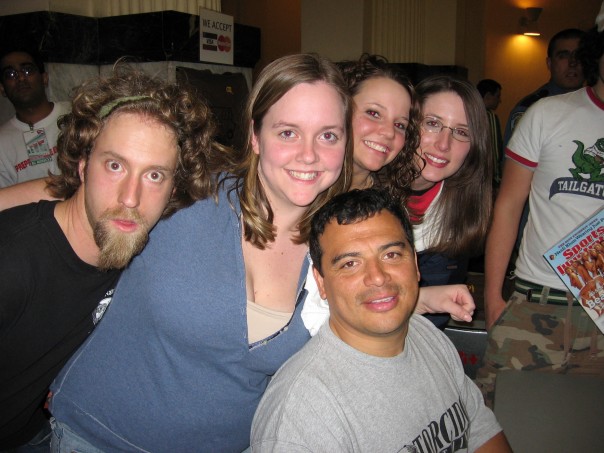 Then, not too long after, Rebecca and I met Ben Lee, a singer who opened for Dashboard Confessional and once dated Claire Danes, so based on the Six Degrees of Separation theory, I’m like 2 or 3 degrees from Leonardo DiCaprio, so I basically met Leonardo DiCaprio right? 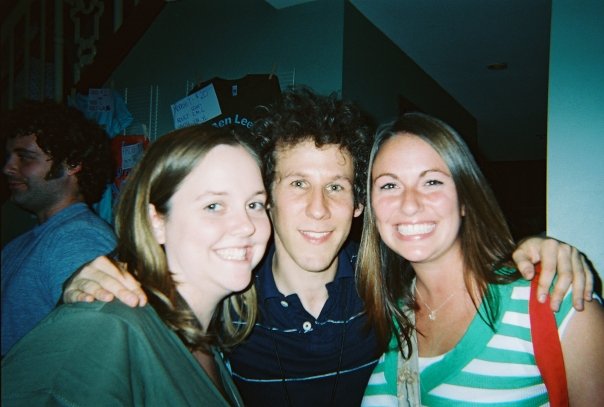 Then I entered what I’d like to call my “Comedian Phase.” Meaning that a new comedy venue opened up downtown and managed to get some big-named people who were not even close to big named then. So they actually met people and posed for pictures after their sets.

I met Daniel Tosh, before Tosh.0. Shannon and I went to see him perform and afterwards, when he was just walking around, we went up to him and I shook his hand and told him he was hilarious.

I met Jon Reep – who was on Last Comic Standing and most recently has shown up on Eastbound & Down, so I’m also like 2 degrees from Danny McBride now, who I love. 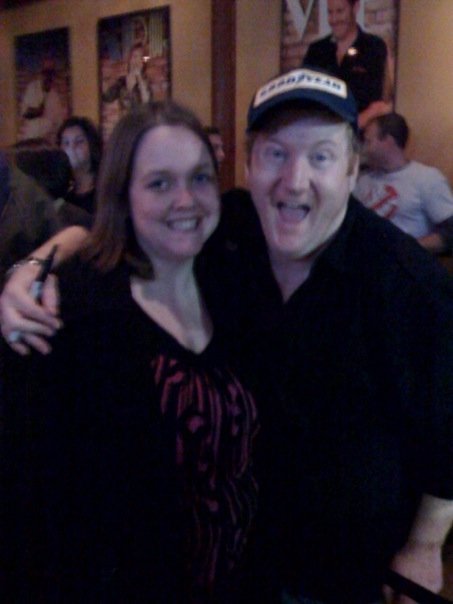 Kevin Hart was just starting to hit it big when he came here, so much so that he was charging for pictures with him, so I snapped this one right before I went up and shook his hand and told him he was one of my favorite comedians ever. Anthony was there, so ask him if you don’t believe me. 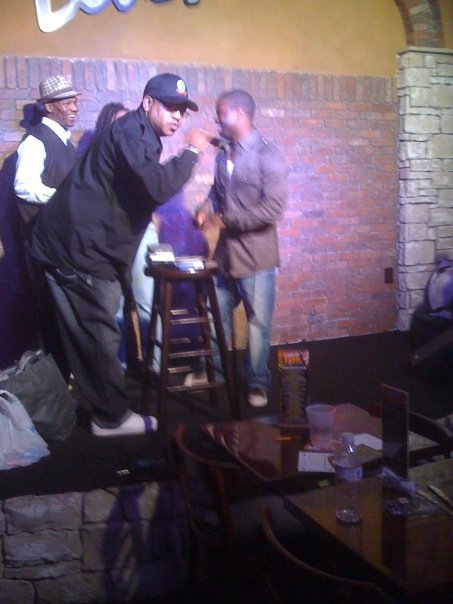 Last year, I got the chance to go to the Derby Festival’s Celebrity Day at the Downs over at Churchill. They use that term loosely because really it’s a lot of D-Listers who like coming here for the Derby and feel awesome that they’re the biggest names in town. I appreciate and love anyone that loves coming to visit us here and keeps coming back because it’s an amazing town and what goes on here with Derby is indescribable, but yeah, last year especially was slim pickins. At Celebrity Day at the Downs I DID meet Ginnifer Goodwin though, who was in Big Love and He’s Just Not That Into You and who is really short and tiny and cute and who I should have asked why the eff she spells her name that way. But she was about it.

Now this year, I hit the motherload – in my opinion anyway. Once again, my job required someone to go cover Celebrity Day at the Downs, and since I was the “veteran” at it, I got to go again, and boy am I glad I did!

So every year there’s usually one huge, huge name (at least to some people) that comes into town for the Derby festivities. This year, it was none other than the Mighty Ducks man himself, Emilio Estevez.

Yes. I realize the man has had a long career, in two of my favorite movies, in fact: The Breakfast Club and The Outsiders. But come on, you cannot look at him, talk to him, hear of him and not think of one of the all-time best trilogies there is – MIGHTY DUCKS.

The other editor assigned to go and I had so many questions and the possibilities of if we met Emilio were endless. Do we make a Flying V? Do we quack? Do we ask him about Joshua Jackson or Keenan or to teach us a triple deke? Is Hans still alive in real life?

We went with none of the above, but did make friends with the lady he came to the Derby with, a friend he was working with on a movie in Cincinnati. This would benefit me the next night – but we’ll get to that in a minute.

Jacqui (the other editor) swears we kind of made a flying V when we were walking behind him so I’m going to go ahead and count that in the win column.

We also met Garrett Morris, who is allegedly on that God-awful Two Broke Girls show but was also an ORIGINAL SNL cast member. Very cool, especially for someone like me who would love few things more than to work at SNL in some way. (Seriously, just one time in my life I want to be the one who says “Live from New York, it’s Saturday Night!” at the beginning of the show. I dream big.)

And, you guys, that was not even close to the end of my barrage of celebrity-meeting this year. But this post is getting long and I have a lot more to show and tell, so I’m going to have to leave you hanging for a little bit, but soon you’ll find out who I met at the Barnstable Brown Gala and how I told a story about the celebrity I loved in third grade to that celebrity and made him laugh his head off.