I don’t remember the first time I decided I wanted a tattoo, but I know it’s been at least about 7 or 8 years now.

The first time I remember even coming close to following through with wanting to get one was on Spring Break in college with some of my sorority sisters. Yes I was a cliche, don’t judge me.

I didn’t follow through then because I wasn’t sure what I wanted. And I also didn’t want to get it done at some random shop in Panama City – THAT’S where I drew the line at the cliche, aren’t you proud?

The idea came to mind a few other times, more often after I finished college. I even knew what I wanted and where I wanted it. A fleur de lis, on my foot.

So I did some trial runs. Temporary tattoos (especially ones at football games for some reason) were put on different spots on my foot and I thought about what I would get that I’d want to look at for the rest of my life.

I settled on a fleur-de-lis, because it represents the city I grew up in and love and no matter where I went it’d always remind me of home.

I talked about it once or twice with my parents, who didn’t seem too concerned either way, except for when my dad asked why I would even want one “Cause you don’t even wear a watch.” I’m still trying to figure out how those two things are related.

My aunt, who has several tattoos of her own, told me when I was ready to come up and visit, and her tattoo artist would take care of me. I kept saying OK, but never ended up following through for whatever reason.

I made a bet with my brother-in-law that I wouldn’t get addicted and want more and if I got more than one before I turned 60, I owed him like $100 bucks.

Ashley did a test run one night after a few too many drinks. 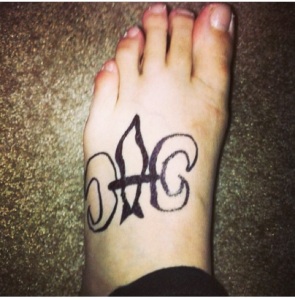 That’s the night I decided it needed to be a LIL BIT smaller. But the artistry is beautiful.

Let’s change direction a little bit for a minute.

The first time I went to Jamaica was in 2004. I was 20 years old, about to be a junior in college and that summer changed all kinds of things.

We made several friends that summer, and, mind you, this was before Facebook and Twitter and iPhone apps that let you text overseas for free. But we kept up those friendships, when they visited us in Kentucky and then when two of us originals went back there in 2009, we made sure to see all our old friends, a few in particular.

When I had the chance to go back again this summer, I got greedy. I wanted to make sure I saw all of my friends when I was over there – even those who had moved away from Mandeville or weren’t involved with youth fellowship anymore. So before I left I sent some FB messages asking if I’d see them.

In keeping up with all of my friends from Jamaica on social media it was like we hadn’t left, like it hadn’t been a few years since we’d seen each other. I got to see Jason and Nick in Kingston and TJ showed up at our welcome dinner.

TJ is an artist. A pretty amazing one at that. And he does tattoos. That night when I saw him for like the first time in 4 years, the first thing that came to my mind was to ask him to do my tattoo – the one I’d been wanting for years but never sucked it up and gotten it done.

Because he’s awesome, he said yes, of course he’d do it and that was that.

My kids were excited – they wanted to come watch (probably because they thought it’d hurt and wanted to see me in pain..I know how they are) and I reminded them that none of them were allowed to do anything like this while under my supervision. (That whole “do as I say not as I do thing.” I’m gonna be a great parent.) Spoiler alert – They didn’t get to come watch the process but they saw it and poked at it and freaked out about it the next morning.

Anyway, once we figured out that I’d get it done the last day I was there, I didn’t think too much more about it. It was gonna happen and I wasn’t going to change my mind. And my group asked about it every single day.

Fast forward to Sunday, July 14 – our last day in Jamaica and Tattoo Day. After helping lead the church service with our group and the group from Andrews, I said goodbye to the youth – who were going to a pool party and then their respective host’s houses to pack – and went to TJ’s to face the needle.

I didn’t get nervous until I texted him and asked if he was ready.

Then my hands got clammy and my heart did that really fast beating thing that it does when I’m anxious (or about to jump into 30-degree water).

I asked for rum, which is apparently not allowed before tattooing cause it thins your blood and if you bleed it won’t stop and hold the hell up I’m gonna bleed?

But I settled on one and while TJ got the stencil ready I texted my sisters to let them know what I was doing. Sami was in Rome, and Rachel was on my parents’ couch talking to them, neither of us telling them what was going on.

She told me later they were trying to guess what I’d be doing that day and she had to bite her tongue cause they had no idea..

So then. On went the stencil.

And then the buzzing. I think the sound is worse than the actual needle, but TJ will tell you that’s a lie because my foot twitched about 30 times while he was working. So much so that I’m kind of surprised I didn’t cause him to draw a line up to my ankle, or tear a hole in his pants leg that I was gripping with my toes.

Also, my fingerprints may or may not still be on the chair arms in Pat’s (his mom’s) living room, where this was all taking place.

But the two of them kept me calm and I managed to stop shaking enough to get some pictures. 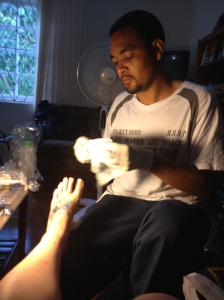 He told me to pick a color to fill it in with, which I completely forgot I would have to do. I went with old faithful: blue. But navy blue, not a blue people would think represented UK, ’cause that would just be awful. 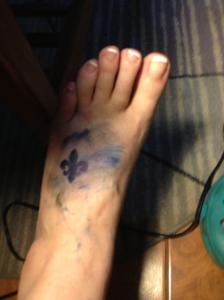 And then it was done. I lotioned it up and stared at it a lot. And thought that for all my over-reacting and twitching it wasn’t that painful.

I don’t know what it was that made me decide that this was the time I’d actually go through with getting it done (I have an idea though) but I’m glad I did.

It means a lot that it was done in a place I love, by a person I care about, during a week I’ll always remember. And that’s alright by me.

Besides the design meaning Louisville, it now has even more meaning because of where and when and who was involved. But yes. It means a lot. And it looks really good. And I checked it off my list. Oh, also it was done while I was chaperoning a church trip with teenagers and allegedly I was “in charge.” So. There’s that.

And, yes, I already know what and where the next one will be. I’ve already alerted my tattoo artist…