A little over a month ago, I was getting in the shower (p.s. I have taken many showers since then, just so you know), and made the mistake of stepping in before I’d tested the water.

The hot water wasn’t coming out so I got a nice, cold surprise to wake me up for the day. Naturally, I yelled “SHIT.”

This was all before I was to jump into water that most likely would be much colder, for the Polar Plunge benefiting Special Olympics. As I waited for the water to warm up to proper showering temperatures, I was asking myself what the hell I’d gotten myself into.

You guys, that water was COLD.

Let me start at the beginning.

Sammi, my brave bf who drove five hours to jump with me, got in the night before the plunge, and we calmed our fears with multiple margaritas followed by beers and Sammi meeting a man named “Meatball” and that, my friends is a story for another time.

The next morning, we got up semi-early and dressed in our “costumes” we’d decided on for the event. Well, Sammi decided on them. And bought them. She’s a good one, that girl. Our costumes were from the thrift shop, which was our “theme.” We left the tags on and wore Cosby sweaters from years ago and some tweed jackets. Mine even had the elbow pads. Legit.

The week before the plunge, it was ridiculously cold. It even snowed a few days beforehand. That water was not going to be pleasant. Besides the fact it would probably give us frostbite, it’s the Ohio River, not known for its beauty, or cleanliness.

Luckily (ha) the day of the plunge, it had warmed up some. Enough so as Sammi and I walked with our fellow brave soldiers – my cousin, Ethan and his gf, Hope, we didn’t feel too bad.

Even better? When we got to the registration area, there were free doughnuts, hot chocolate, and for the low, low, true-to-downtown bars price, there were shots of liquor for sale for $4 a piece. I’m kind of making fun now, but I probably should have gotten a little buzzed at least before I took this leap. Literally.

We saw all kinds of other costumes, including these guys:

At the time, I thought they were crazy for barely wearing anything. I would come to regret that thought.

So as with anything you’re trying for the first time, there are lessons to be learned. The first one we learned that day, was that we could have slept probably another hour or so, because we ended up waiting around to even get in line to jump for a while.

We saw someone get engaged, we saw people lose parts of their costumes, we saw more of a man dressed in a Superman costume than we cared to (ask Sammi about that, she tells it better). We also saw people come out of the water cursing, and yelling. And sprinting for the hot tubs – where you were supposed to head once you got out of the Ohio. 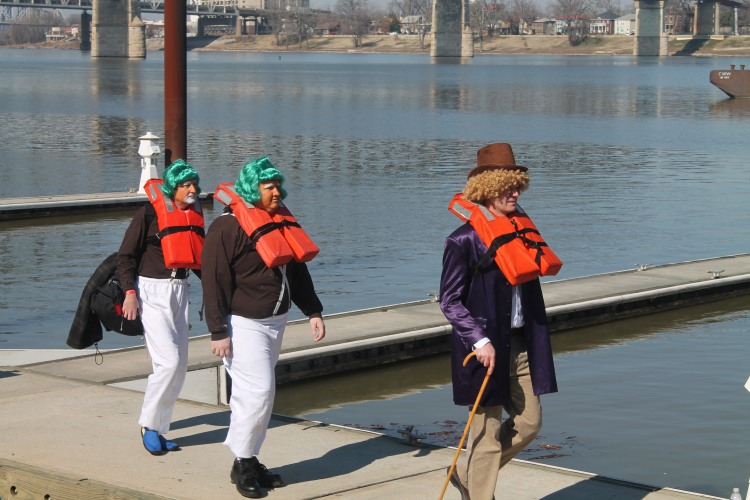 I think watching people go before us made it worse. Then they told us how cold the water was. 39 degrees. Sammi was asking why we were doing this again and I played it off like I wasn’t too worried about it, but inside I was wondering if my body would just go into shock and I’d pass out the second I hit the water when it came time for us to go jump.

Eventually they called for our group, and the four of us got in line to make our way down to the areas we’d be jumping from. At this point Hope and Ethan had decided to go in their bathing suits, and I was amazed. Because at that point, I didn’t yet know that wet tweed is pretty much the worst thing in the world.

Anthony was jumping with a group from work later, so while we walked down, he and his fiancee, Maegan, took care of documenting the event with my camera. 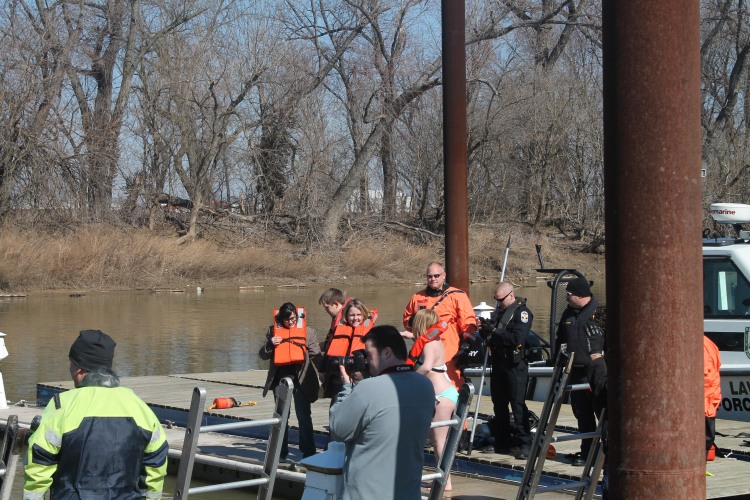 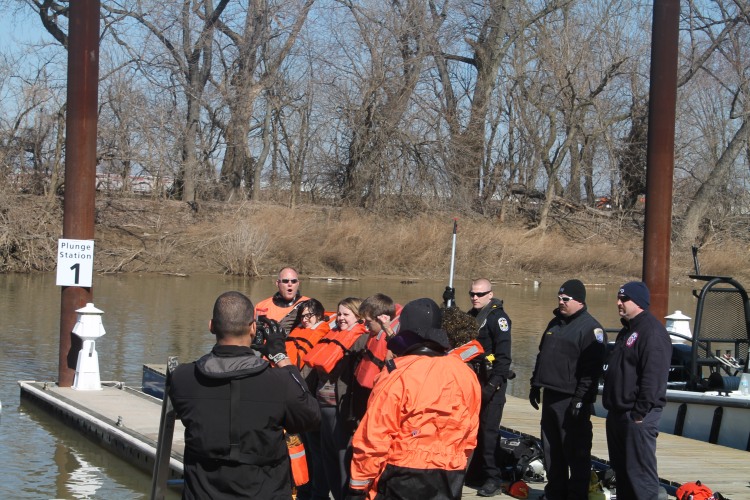 I am not sure if I’ve ever been as nervous to do something as I was in those 30 seconds before we knew we had to jump. I’d come that far, couldn’t turn around, couldn’t not jump…and when they counted down, I held my nose so none of the river grossness would get in and then… 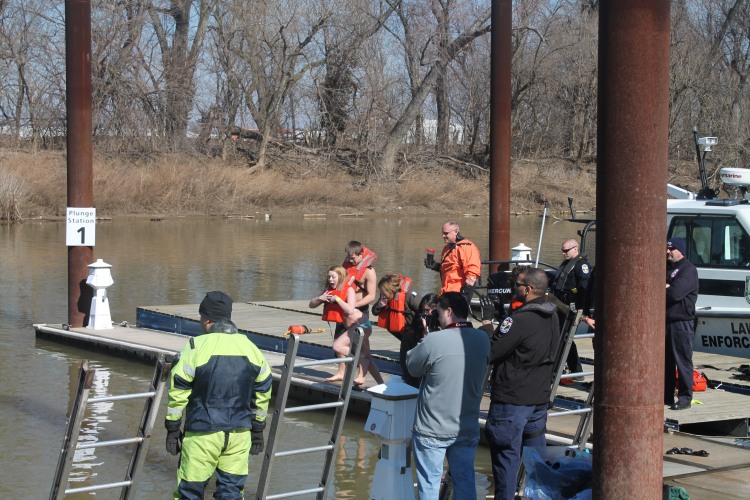 Knives. Or needles. For about half a second when my body was completely submerged, I didn’t feel anything. Then, the pain. It felt like hundreds of tiny knives or needles were stabbing me at once and that mother-effing tweed jacket paired with the lifejacket wasn’t helping. I felt like I was choking. I felt like I’d been punched in the gut. And I couldn’t swim. I’ve been a fish for as long as I can remember, but suddenly I could barely doggie paddle.

I panicked a little. I said the F word a lot. I cursed Kate Winslet for not letting Leo on the door with her in Titanic because that water was really damn cold!

Before we’d jumped I’d seen some of the emergency personnel down by the water with those sticks with the loop of plastic or rope of whatever at the end. You know, those things they use to like, capture animals or zombies? As I slowly doggie paddled to the ladder, my teeth chattering, I was telling myself “Do NOT be the one they have to drag out of the water with that thing..you’re better than that.”

And then I climbed up the ladder, finally, just about losing my pants in the process. I silently gave myself props for deciding to wear bathing suit bottoms under my pants because that could have been real unfortunate for the 100 or so people still watching.

If I could have moved any faster to those hot tubs I would have. It felt like it took me 10 years to get there.

And yes, by the time we got to ’em they looked exactly like the river, but I did not care. THAT water was warm.

About 5 minutes after getting out of the hot tub, I finally caught my breath. I started to breathe normally again and all I wanted was dry clothes, and, as soon as possible, a hot shower.

In the changing tents, some of the girls near me were talking about how they couldn’t wait to do it again next year. I didn’t know how they could think straight, because I couldn’t feel half my extremities and had what felt like about a gallon of the Ohio River sloshing around in my ear.

After putting on some warm, dry clothes, watching Anthony go through the torture we’d just survived, and heading back to the car – where we cranked up the heat immediately, it was done.

I think the total raised for the day was something like $300,000 or more. Thanks to the donations from my amazing family and friends, I was able to contribute $305 to that total.

Which reminds me, whether you donated or encouraged/supported me in any way, I can’t thank you enough. I am very blessed to have such a great support system that is willing to support me and the amazing group of athletes this event benefited.

Maybe it’s still too close to the original trauma, but I can’t say for certain that I’ll be jumping again next year. I’ll BE there, for sure, but at the moment my plan is to stay dry. I will volunteer in some way, and support those braver than me. And I’ll fund-raise (you get a shirt that says that you were chicken if you fund-raise and don’t jump, btw).

I’m so happy I did it though. I’m very proud of myself, and my friends who jumped with me. It’s something I’ll never forget, for sure, and like I said, it taught me all kinds of lessons that I’ll remember forever.

Most important one? Don’t get tweed wet. 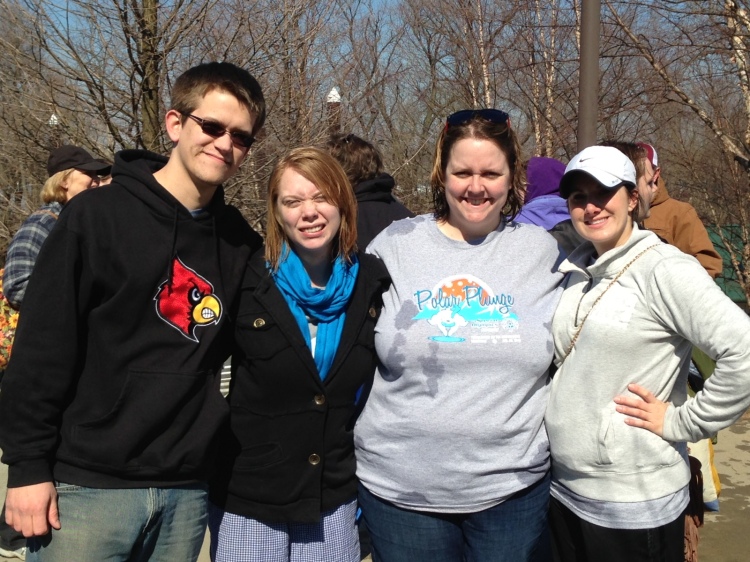