Not really, it’s just in boxes. But the above is what I keep saying, jokingly, as an excuse for just about everything.

Didn’t you just wear that shirt the day before yesterday? Yes. But I have no idea where any others are. My life is in shambles.

Why were you late today? Because I had no idea where my shoes were and had to look for them for 20 minutes. My life is in shambles.

The lease was up and The Roommate is getting married and it was time to move on.

I haven’t had to move in almost four years. The whole process sucks, big-time. There’s the packing and the lifting and the address changing and the cleaning that spot in your room you haven’t seen since you moved in because your entertainment center was in front of it and who can move that by themselves?

It’s not like it snuck up on me, we’ve known for a while that our lease was up in January and after Wedding Season was over, I had weekends available to go look at new places. Namely, a condo.

I found one in November that I loved. It was perfect – perfect size, perfect location, perfect price….so we start the process of making me its owner. And then the bank got involved.

Long story short, the loan process can be a bitch and it’s complicated and unless I came up with $18,000, I wasn’t gonna get this place.

Seeing as how you didn’t read a post or receive a phone call that I won the lottery, the condo didn’t happen.

So, just a few days ago, I moved, as planned. Only the destination was a little different.

I write this from my “new” bedroom at my “old” house. I’m back with the parents – from now on known as Roommates – until I save up a bit of money and pay down a few things and find another place I like as much as that other one I found.

I got a job out of town a month after I moved home from college post-graduation. And spent two years there before I got back to Louisville. It was at this time, I SHOULD have sucked it up and lived with the parents and saved some money.

But I didn’t, because

I found an apartment, that I could barely afford but it was mine and I paid all my bills on my own and that’s what you do as an adult, right? Yeah. Until you can’t afford it because you pay your bills on your own and you make plans to move in with your BFF so you guys both can afford to live AND have somewhat of a social life.

So, again, long story short, I’m doing now what I should have done in 2008. Accepting the help of living rent free and getting some other things in order before I find something that can be all mine. I’m damn lucky to have parents that are allowing me to do this and I hope they know that I don’t take a second of it for granted.

Wanna see my new digs? Those of you familiar with the ‘rents place will recognize the space I’ve taken over as the home theater – also known as the room where you watched movies and made out in high school. Or that room with the cool secret door. Or the cave. All of the above. 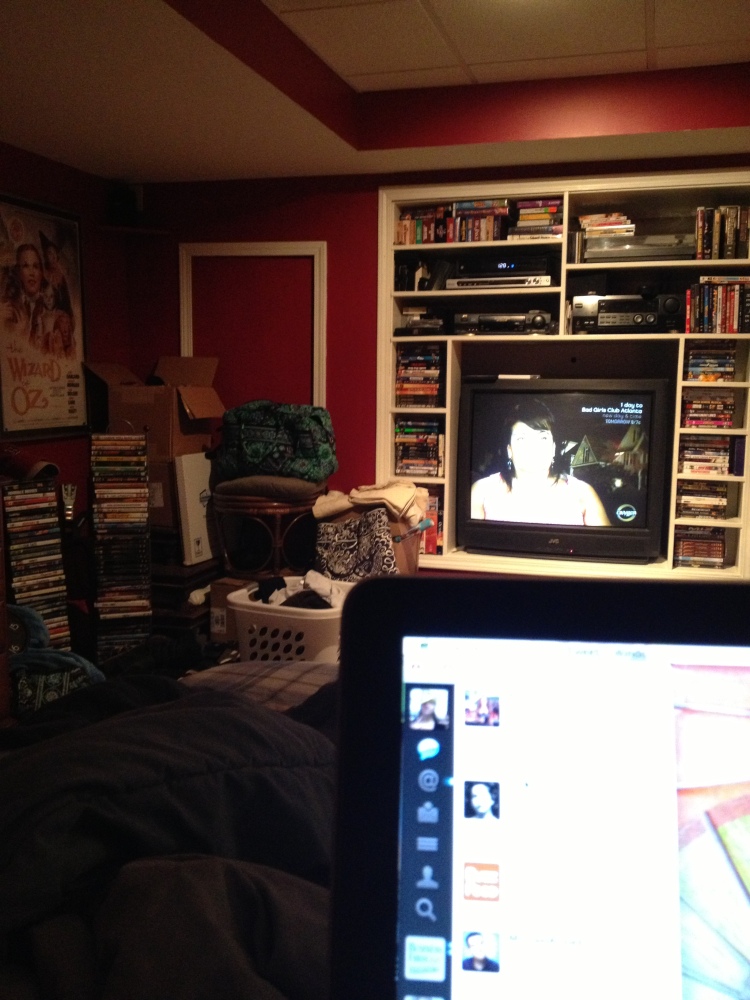 I wake up every day looking directly at either John Wayne or The Three Stooges.

And there’s a clock down here that goes off at 47 past the hour.

But yeah, that’s what I’ve been upto. And between that, the holidays, my girls being home for a long break, and some other major changes that simultaneously make me nervous and very excited, my writing here has been severely neglected.