You guys, I am so obsessed with the Olympics. I’m watching it as I write this, like I have been, with any second of free time I have except for from 10-11 on Sunday nights because that’s when Breaking Bad is on and I need to know how much crazier Walter White’s gonna get.

If Olympic swimming was on year-round, I’d have to quit my job. I wouldn’t be able to focus. I barely can focus now as it is. I had to change the channel.

I want to take Andrea Kramer’s job, not just because she gets to talk to the swimmers as soon as they get out of the pool, but because she is the worst, dumbest interviewer I have seen in my life. And she doesn’t try to touch their abs, which is a travesty in itself, because that’s all I’d be doing. 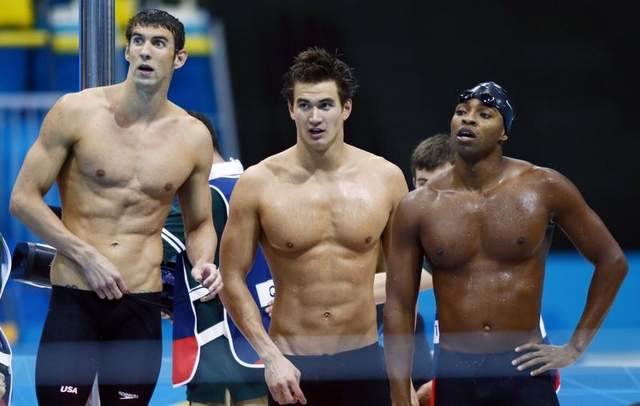 How could you not?

Related: In one of the group texts I have going with some of my girls, we had a discussion about which male Olympic swimmer’s abs you’d like to lick Nutella off of.

But anyways, yeah I’m a little obsessed. I know so many olympians names.. from Team USA, from other countries, from all kinds of sports. My new favorite Olympic sport is archery, I think, but who knew badminton was so intense, because it is.

Also, I still do not understand tennis scoring. It’s played the same way as badminton, ping-pong and volleyball yet it is too good for normal scoring.

These athletes are beasts in every single sport…Gabby Douglas is so adorable I can’t stand it and it’s ridiculous how good she is at gymnastics. The women’s volleyball team – Misty and Kerri – have inspired me to do even better at my just-for-fun outdoor volleyball games Monday nights…

Ryan Lochte’s kind of a d-bag, but he’s not bad to look at. And he wins medals.

And Michael Phelps is superhuman. That’s all there is to it.

I don’t get this way about winter Olympics. Just summer, for some reason. Maybe because there are more ripped male athletes doing things shirtless?

It’s just so exciting though. No matter the sport. People are making their dreams come true and proving that they are the best in the world at something.

And I am the best in the world at watching. Pretty sure.

I have no idea what I’ll do with myself once the Olympics are over, but I do have a wedding to keep me busy for a bit. And Shark Week starts soon.

For more observations on Olympics and the amazing specimens competing in them, follow me on Twitter – @LoBoogie.