About a month ago, I got a text from my uncle, Tony, asking me if I was available to chauffeur the Bourbon Tour.

What Bourbon Tour? First I’d heard about it. Then he said it was scheduled for “24 Sept.” Because he’s apparently from another country.

Or he was drunk because when I said I was free that day he said “We could get polluted.”

Oh and then I learn that not only will I be chauffeuring, I will be doing so in a bus.

Maybe not a bus, but that sucker was large and in charge. You guys, it beeped when it backed up. Like a moving truck. 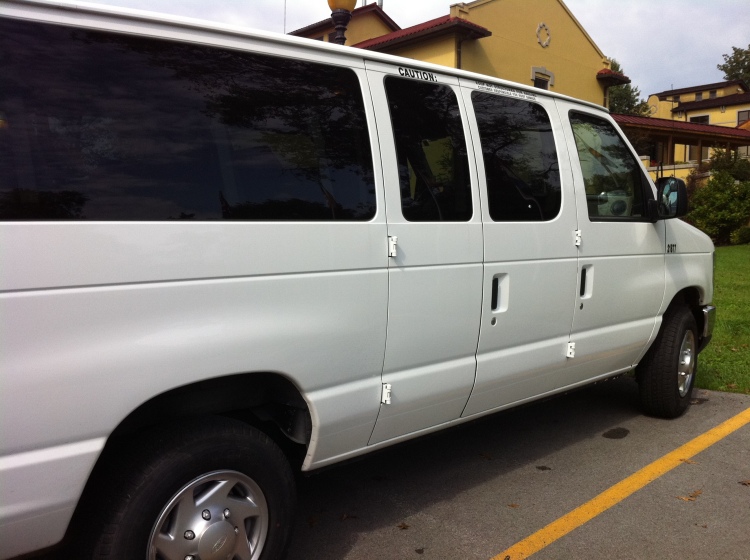 The following is a chronological order of events as best I can describe them. Driving that van was nerve-wracking so forgive me if times aren’t approximate.

8:45 a.m. I have to climb the five feet to the cab of the van from the ground and panic as I back out. The van is beeping. And I basically have five dads that will tell me how to drive.

8:56 a.m. I decide it’s time for them to do their first shot – on the hour. We have two bottles of bourbon in the van.

8:57 a.m. I wonder what people are thinking as they pass us on the road – am I taking them to jail? The mental hospital? Church?

8:59 a.m. DJ Swarleees (Chuckie) puts on LMFAO’s “Shots” to put them in the right mindset.

9 a.m. The first shot. I forget what the toast was to, but I decide they need to take another one in 20 minutes. Some grumble and I wonder if we should have brought a puke bucket.

9:10 a.m. I assign them all numbers so that we can count off and make sure no one is missing when we leave anywhere. I’m efficient like that.

9:20 a.m. Time for the second shot. I am not even usually up by this time on a Saturday but I am directing 9 guys to take shots of straight bourbon. Good morning.

9:25 a.m. I say they should take another one before we get to Four Roses, our first stop. They all wuss out. They are not taking full advantage of having a designated driver for the day.

9:30 a.m. We get off the exit in Frankfort and I have horrible flashbacks to working in Owenton.

9:40 a.m. We get to Four Roses. I park the van LIKE A BOSS and we go inside to get our “passports,” so we can be all official and shit.

10 a.m. We watch a video before the tour starts giving us the quick description of the bourbon process (SPOILER ALERT: By the end of the day, we could probably make our own, no problem.)

10:05 a.m. Caleb is our tour guide. You won’t forget his name either, because it’s on a gold plate on his belt.

10:08 a.m. We are in the place where “the magic happens.” Some of it, anyway. The stuff kind of looks like vomit though.

10:15 a.m. I decide that this place looks like where every bad guy fights with the main character in action movies. I ask if anyone will let me pretend to throw them over the side. No takers.

10:30 a.m. We get a better view of some of the vats and decide it’s kind of tempting to want to spit into them, but decide against actually doing it.

10:40 a.m. I make sure there is photographic proof of our first official stop. But for some unknown reason, it does not upload to the blog. Wamp wamp.

10:50 a.m. Time for tastings. Eth smells it, like that can prepare you for when you drink it and it burns all the way down.

10:51 a.m. Everyone gets two shots each. Allegedly you are supposed to sip. Total shot count for the day so far: four each. It’s not even lunchtime.

10:59 a.m. Speaking of food, it’s time to open up the snacks in the back, because even though they opened up a pack of muffins that basically served as chasers to the first shot, they are hungry.

11 a.m. Uncle Chuck has bought something and doesn’t want to carry the bag. Complains about being the Bag Bitch. He tries to get me to take it and I say that’s not what I’m there for, he can be his own Bag Bitch.

11:15 a.m. They want to make a run to Walmart before the next stop. We need beer – for the rides between the tours – chips, TUMS and Ibuprofen. Ibuprofen is for Dad. He asked me “What kind of girl are you that you didn’t bring Ibuprofen?” I reply: “The kind you bring on the bourbon tour.”

11:30 a.m. The boys come back to the van after their Walmart shopping excursion with 24 beers, two bags of chips, TUMS and the Ibuprofen. The muffins have been forgotten.

11:45 a.m. We pass signs for a Civil War re-enactment and contemplate a schedule change.

11:50 a.m. We are at our second stop, Wild Turkey. There is a turkey made out of a barrel. Everyone decides to ride it. 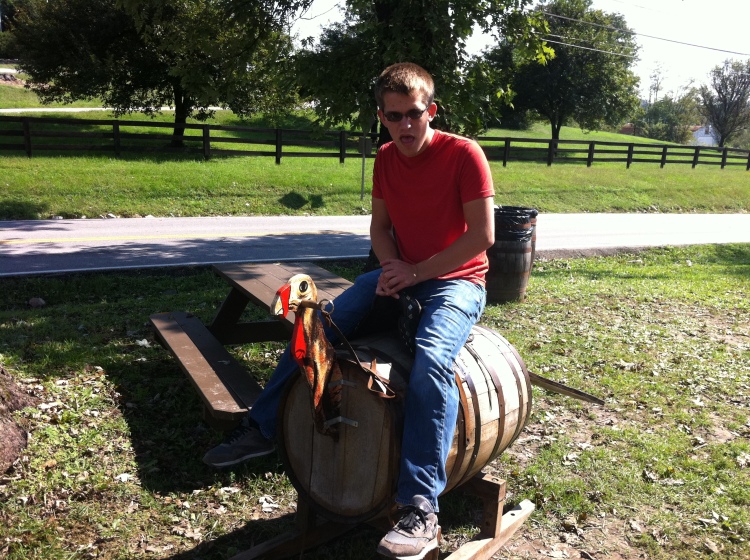 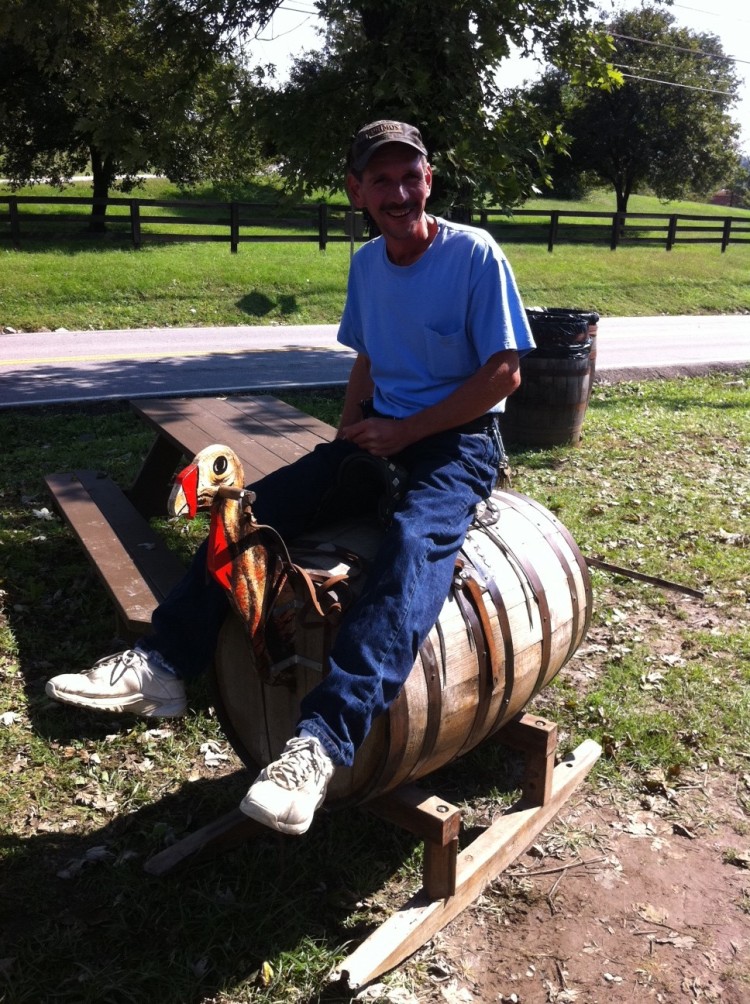 11:51 a.m. Dad channels John Wayne in True Grit and holds the reins in his teeth. Good thing we will have alcohol soon to kill the bacteria he just got in his mouth. 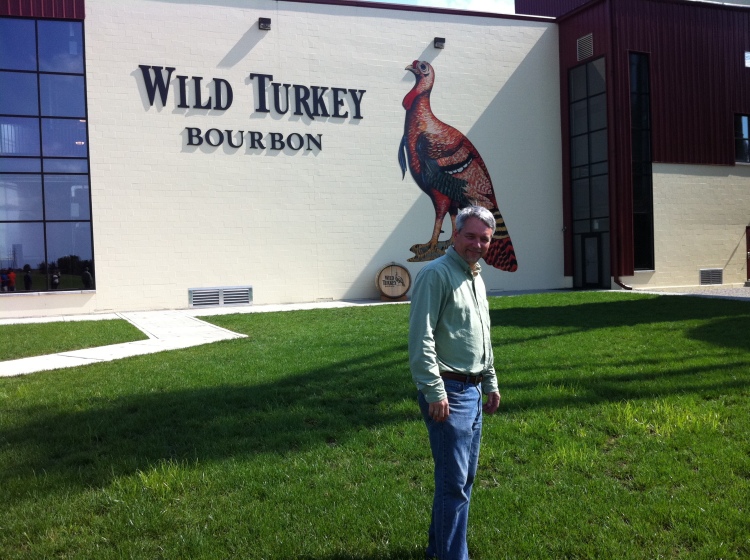 12:35 p.m. We learn that what they don’t use for the bottled bourbon goes to cows. We immediately picture cows being wasted. We also learn that some people’s job is simply to smell and/or taste the bourbon to make sure it’s good to go.

12:40 p.m. We see a dog lying in the grass. Might be dead, might be drunk. Neither was confirmed. 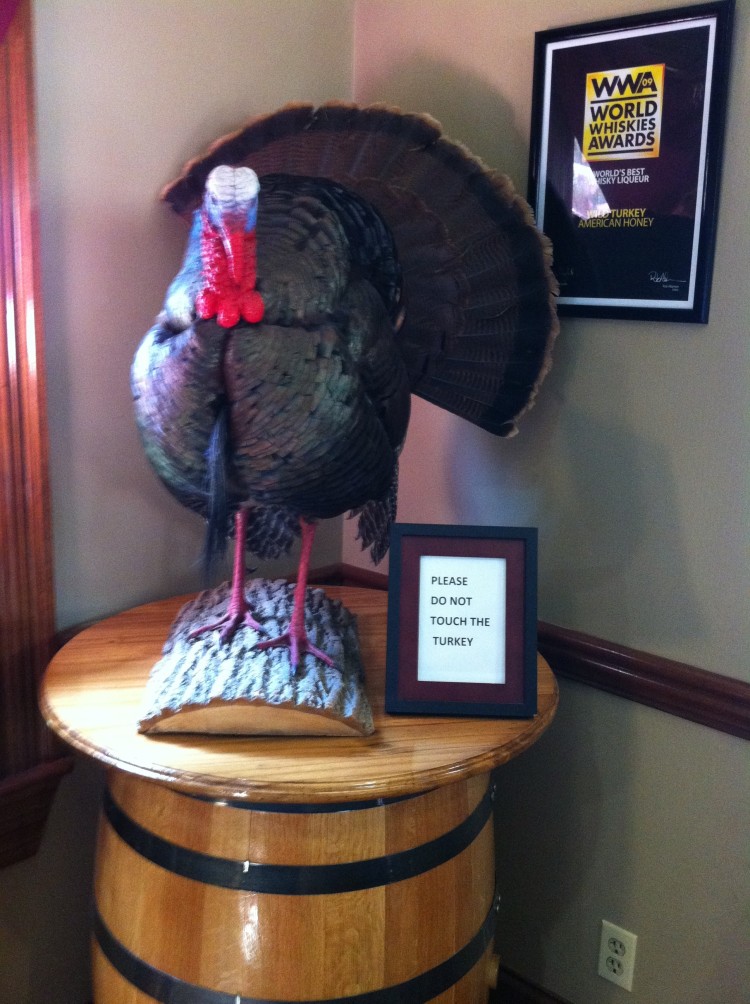 12:51 p.m. Happy boys. And possibly a little drunk. Some more than others.

1:18 p.m. After a couple unsuccessful attempts, Chuckie secures a win on the coin drop game, earning himself some free hushpuppies. 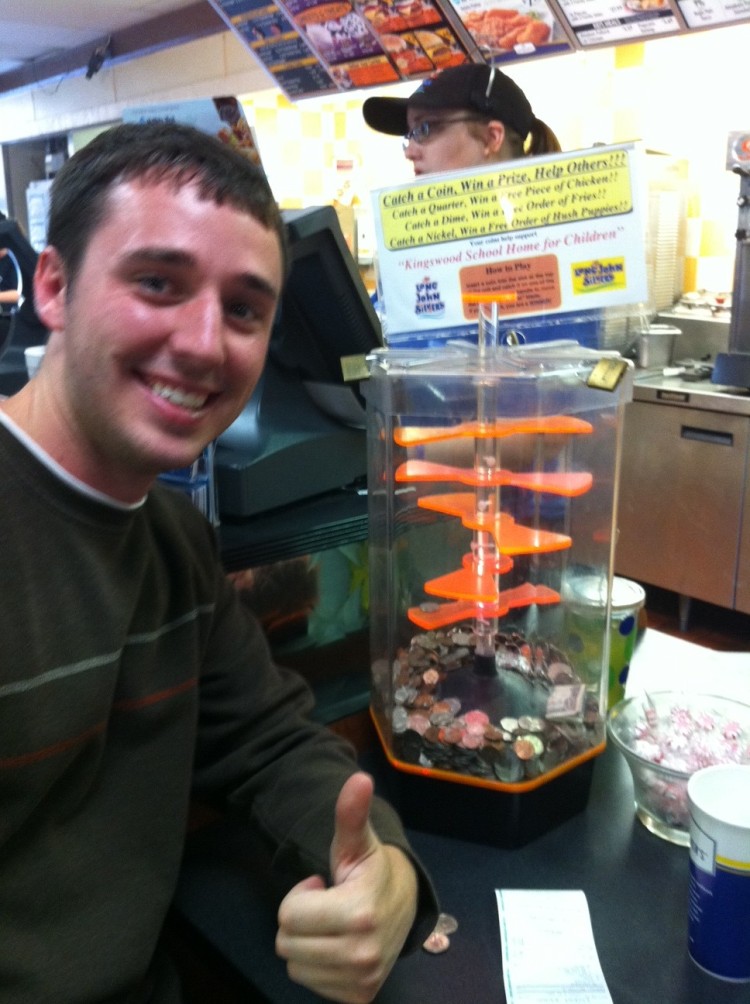 1:40 p.m. Lunch is over and we’re headed to our final stop, Woodford Reserve. Sidenote: I have been parking like a champ ALL DAY. The guys are impressed.

1:45 p.m. Chuckie decides he wants to open his own distillery and call it “WoodChuck.”

1:50 p.m. We get to Woodford and immediately see where the tiny bottles are made. Psyche. 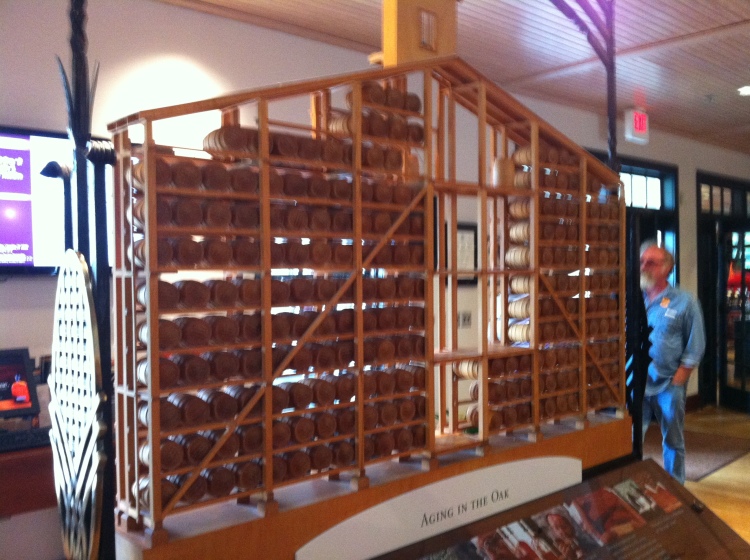 1:58 p.m. Me: “Did you get a bourbon ball?” Donnie: “Nah, I ate bourbon balls a million times and never liked them.” Chuck: “Then why’d you keep going back after the first time?”

2 p.m. Tour starts at Woodford. We are sitting in church pews. Watching a video. By now we can pretty much recite the process ourselves.

2:15 p.m. Our tour guide, Jack is talking through a microphone with a hand-held speaker aimed at us. It’s amplifying his voice less than if he just talked normally.

2:28 p.m. “If you get all the stamps on your passport you get a T-shirt.” Chuck: “Yeah get it all done and get the T-shirt to wipe the puke off your face.”

2:30 p.m. Jack tells us how they smell-test the bourbon and mentions how you “put the cork in the bunghole.” That’s the word they use. Our group laughs. Because we are children.

2:32 p.m. Jack passes around a glass that he’d had full but had poured out so nobody would drink it when it’s passed around. Uncle Chuck is not happy about that.

2:35 p.m. Jack talks about tastings and how it gets the flavor, since it’s in the charred wood barrels. Chuckie is confused. “How the hell does wood taste like vanilla and apricot?” Uncle Chuck is still pissed bourbon has been poured out.

2:40 p.m. We load the bus back up to head back for the tasting and Jack mentions comment cards he hopes we fill out. Uncle Chuck: “I’m gonna put on that comment card to quit throwing that shit down the drain.”

2:45 p.m. Tasting time. Everyone’s taking it slow. Dad is posing as “The Most Interesting Man in the World.” Stay thirsty, my friends.

2:50 p.m. Bourbon’s all done and it’s time to go home. But not before a picture of all of them at probably our favorite stop on the tour. Well it might not be Uncle Chuck’s favorite. He may still be pissed at Jack.

2:53 p.m. Uncle Chuck shows that he’s not to be messed with. Hence the glittery tattoo.

2:55 p.m. The guys are thirsty on the way back to the car, they want their beer and are listing what they have left in there to drink. Tony: “We have chips!”

3:06 p.m. Chuckie decides his distillery will be “WoodChuckie.” Totally different

3:30 p.m. On the road home. Everyone is quiet. Surprisingly no one has passed out/taken a nap.

4 p.m. We are home, safely. But the day’s not over. There’s cornhole to be played.

4:03 p.m. The morning’s plan of waiting until the spring to visit the other three distilleries has morphed into “Let’s try to do it one weekend in November.”

They better make sure their driver’s free.

Stay tuned for Part Two, whenever the guys decide they wanna go. And for up-to-the-minute updates on the next event AS IT’S HAPPENING, follow me on the Twitter.

2 thoughts on “Bourbon Boys: Part One”