Personally, my favorite color is blue, but I know a lot of people who like purple. And I don’t mind it at all. In fact, a good percentage of my wardrobe is that color.

Which reminds me, I need some new clothes. Meaning The Roommate’s Lady – Maegan, for future ref – needs to go to the stores with me and pick out my clothes. Like she did last time. And I spent entirely too much money but damn if I didn’t get a lot of compliments. 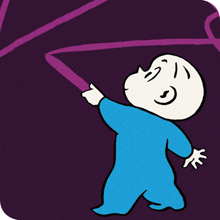 This My Little Pony that probably smells so strong she makes all the other ponies kept in the box with her smell like her. I think I had like, one blueberry-scented pony and next time I opened them to play with them, they were all blueberry-scented mixed with something.

Purple Rain, by Prince and The Revolution. Listen to this song and try not to sing. Especially when you’re drunk.

Grape stuff is purple too, but I don’t like grape-flavored stuff. Because it tastes nothing like real grapes.

Know what else is purple? Just about everything associated with the Walk to End Alzheimer’s. It’s the walk my family and some friends and I are taking part in in a few weeks and even though they give out purple shirts there, our team will be wearing our own, complete with little light purple elephants.

By this time, you probably know the drill. I tell you I’m walking, then I ask you to donate or walk with us.

But instead of all that, I’m going to give you some facts.

I saw in an article today that about 5.4 million people in the world have Alzheimer’s. About 8,000 to 10,000 of those people are in this state. My grandma is one of them.