You guys, people say England isn’t known for its food. And to that, I say, “Pshaw,”
on account of some of the best food I’ve ever eaten I had when I was in England.

For reals. England should be known for its deliciousness.

And, because we are American, we took pictures of pretty much everything we ate. And drank. Which was a lot. Prepare to get hungry.

We didn’t have fish and chips – don’t judge, we gotta save something for next time – but we had all kinds of other stuff.

Like, the second day. When we went all proper English and had tea. Along with tiny sandwiches and some delicious desserts. 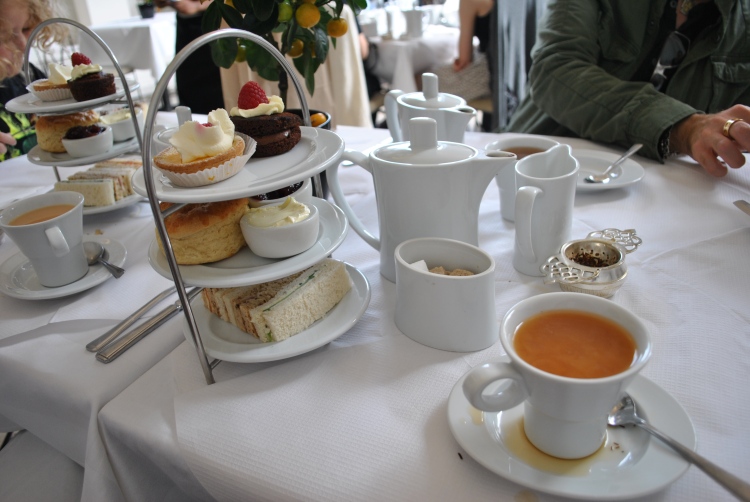 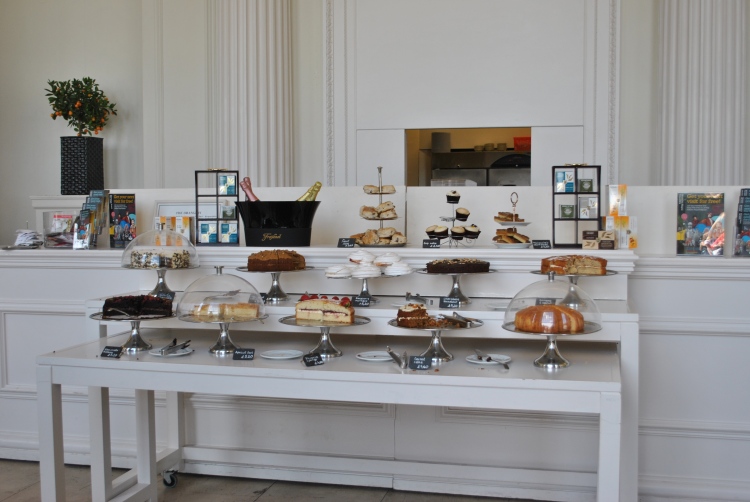 And that, well, that is just a table full of desserts I could have probably eaten every bit of. Including Victoria Sponge cake. She had the cake made for her every day. It must be so nice to be royal.

Speaking of proper, though, we saw a sign for proper hamburgers. But didn’t have any. I’m not sure what constitutes a proper hamburger, but I imagine you have to wear gloves while you eat it or something. 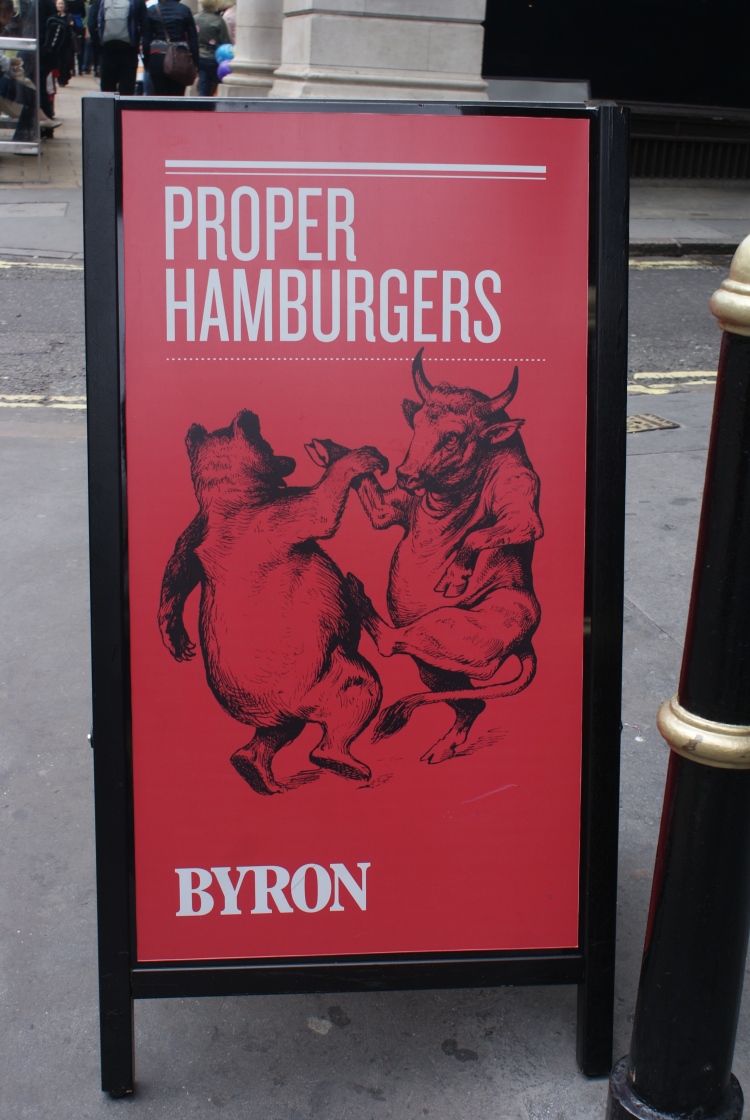 Possibly – in my opinion anyway – the best thing we had was our breakfast at The Wolesley. A close second was the dim sum and other yummy Chinese food we had that was so amazing we spent our time actually eating it and took no pictures of it.

But our fancy Wolesley breakfast started with these beverages – a cappuccino and an affogato (which Ash and I of course called an Afro Cat). The affogato is a scoop of ice cream – yep for breakfast ’cause I’m an adult and I do what I want – with espresso poured over it. 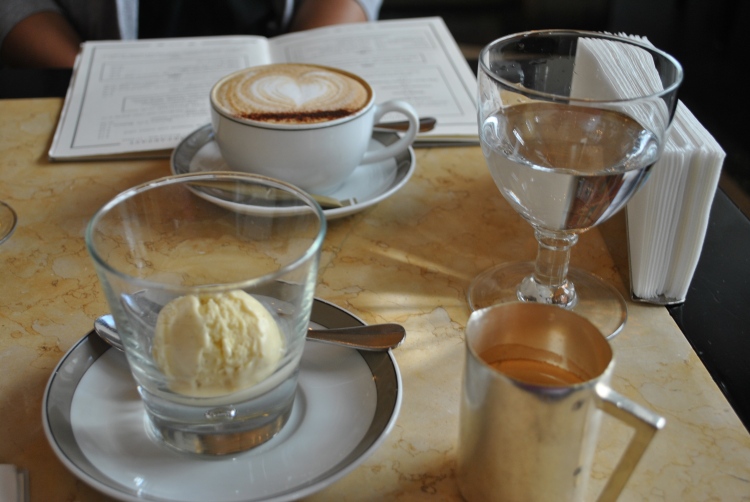 Our actual meals? Ashley had Eggs Benedict and I had something called an Arnold Bennett omelet. 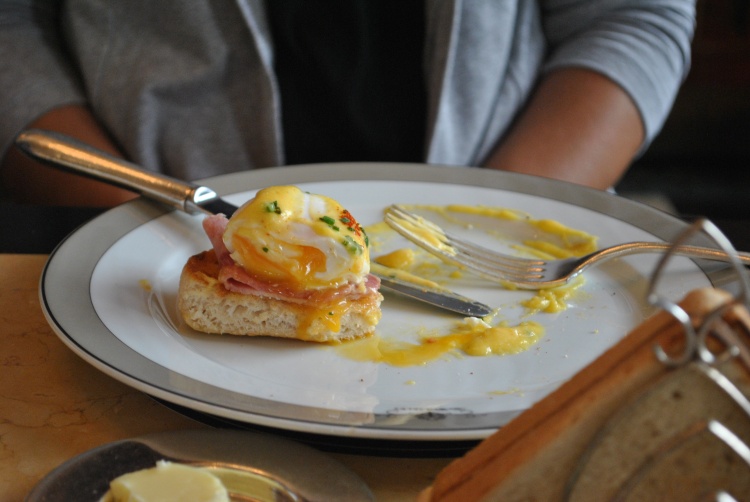 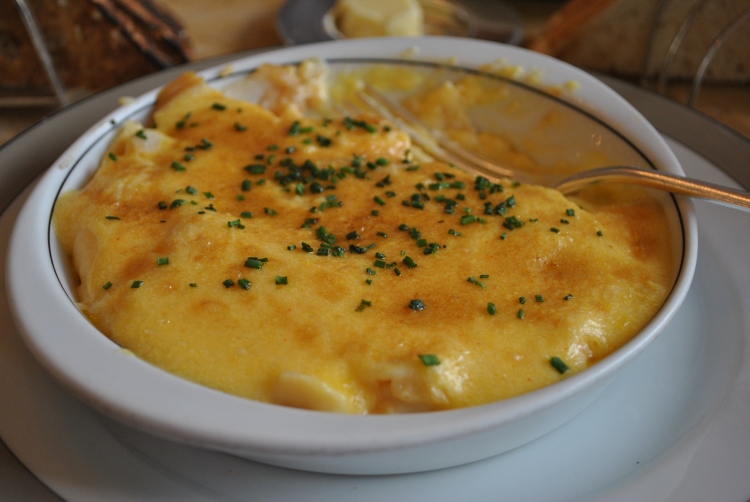 Kids, I don’t eat omelets in America. This trip changed my life.

Ashley got some British candies. And I would have pictures to show you of the display but that wasn’t allowed. So this is Ashley, with her British candies. When we were on the one wrong train we got on our whole trip. 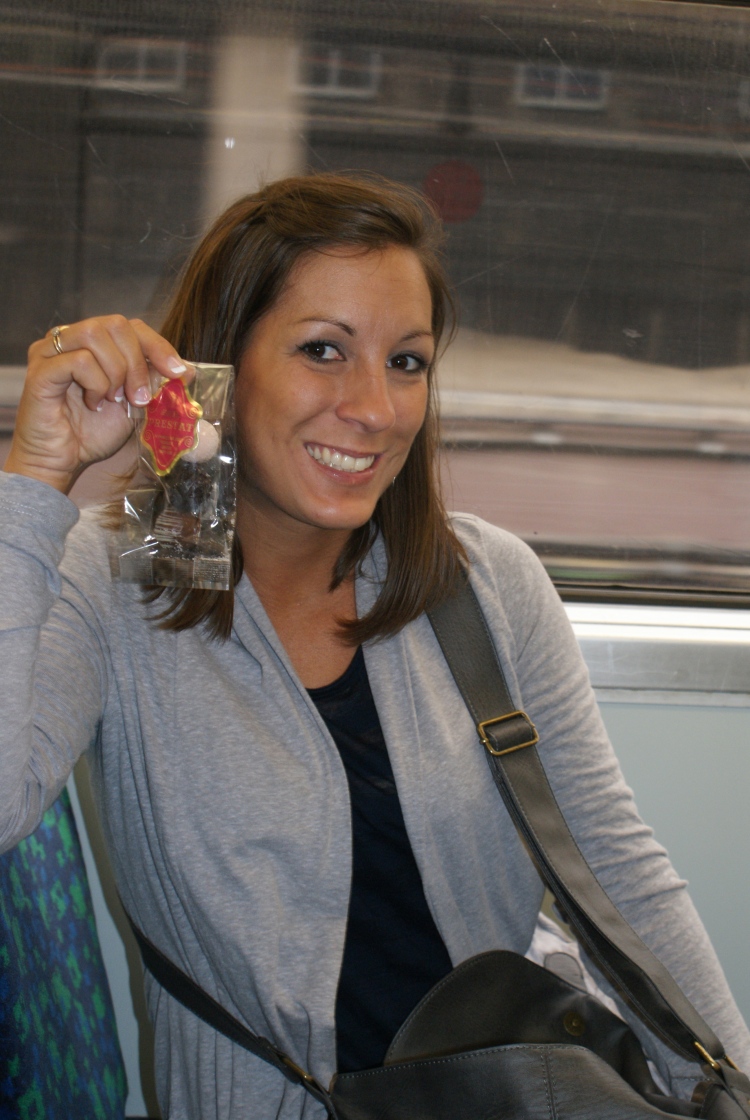 We had some amazing nachos. 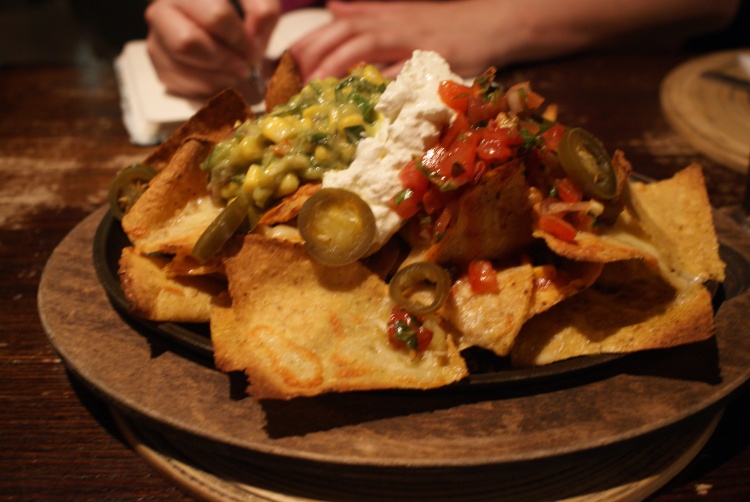 And then there was this other dessert that I may or may not be drooling over while writing this. 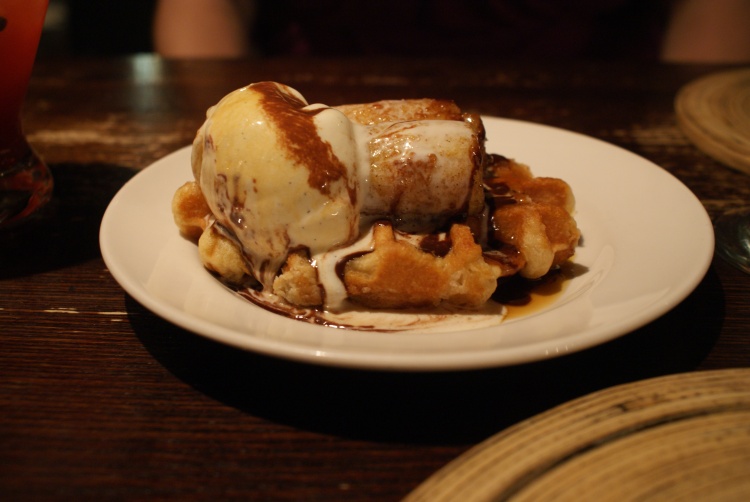 Yeah. That’s a belgian waffle, with bananas and vanilla ice cream on it and some kinds of sauce. I think chocolate and caramel maybe.

At a dinner party we had appetizers and an entree that were almost too good for words, followed by Gu cake. Gu with a little doohickey over the u. And the title of this blog post? Written on the side of the Gu cake box. Seriously.

I don’t like cake, but I would marry this stuff. It was that good.

We also found some new favorite drinks. And I’m strictly a beer girl these days so the fact that I loved both of these means they’re REAL good.

This first one, I honestly don’t remember what’s in it. It’s a Tokyo something. And we drank it in two minutes because we had to go catch the tube. 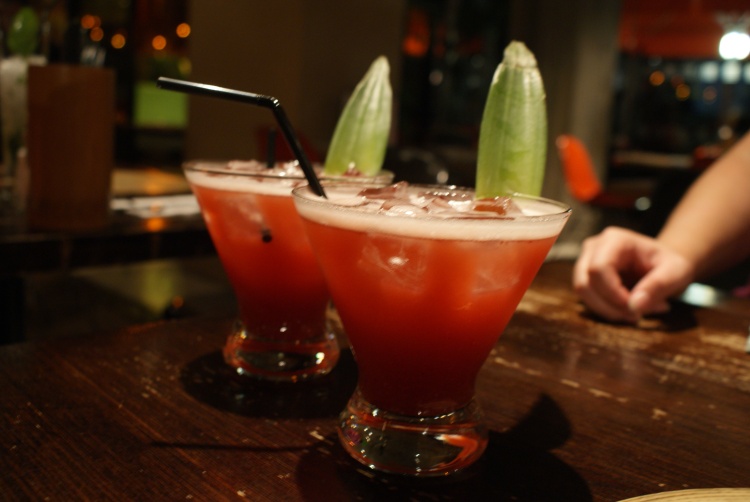 And finally, I’d like to introduce you to PIMMS, a.k.a. THE BEST DRINK I’VE EVER HAD. 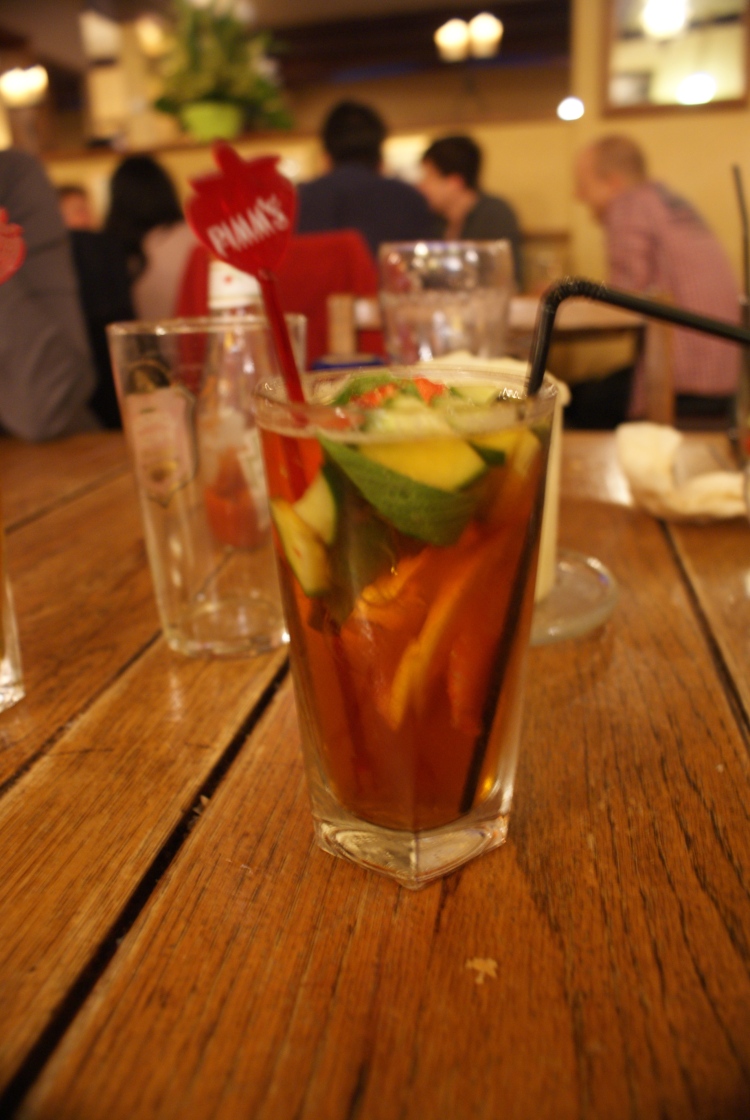 OK. So this drink is a type of gin, I believe. The way we had it – and in our opinion, the only way you should drink it – was in a glass mixed with lemonade and garnished with all kinds of stuff.

What kinds of stuff, you ask? Strawberries, oranges, mint and…wait for it…cucumbers.

I ate so much stuff with cucumbers in it in England. And liked it. What is wrong with me? I pick them out of salads here.

So, if you know where in America we can get some PIMMS, especially without paying an arm and a leg, please let Ash and I know. We’ll be your best friend. And we might let you share…might being the operative word there…

4 thoughts on “Dazzled by the pudds”